The long and tiring term finished… The enjoyable part is the post the whole project on the blog… In this term, I worked on a new issue… “Perimeter block.”In the project, according to the site analysis, there are 528 housing … Continue reading →

In the blocks, it used 2 different unit organization in the slabs and it located on the 6 grid system ( structural system). The first one was used in residential part. It includes more multi-family units for people. The multi- family units were used onthe corner of the block to aquire two façade to take daylight strongly during the day. The core of the circulation is located on the façade to take daylight. In the secon unit organization more includes single units for students and for poeple living alone. With this unit organization, ı aquired more units in a slab and this organization system was designed for upper floor of commercial areas. In the units there is a main axiality from main entrance to right across. When a person open the door, he/she feels the freshess and daylight inside of the house. In some house this ax compeleted with a balcony. The another ax is the wet floor ax Inthe unit gave importance to take daylight maximum in the rooms, so the wet floor is located in floor corridor side.

In the project, tried many ways to create variation inside of the block. Firstly, I tried straight corridor system contains many flats in a slab, but this way was not sıitable for human scale and there was any gap or openings inside of the block, so lack of feeling of fresh and comfortable for poeple living in there. Then, was tried large corridor sysyem but still straight. This became fresh, but still it was not suiatable for human scale,because people see the end of the corridor that has 160 meter lenght. This lenght is too terrşble to see that corridor. At the end, I decided the movement inside of the block. İt was created many gaps and openings creatibg new roof gares and terraces for gathering. With this gathering places poeple could use these places inside of the huge social hosuing. Also pushed some flats and aquired new corridor types. That’s why, people do not feel the long corridor feeling. Corridor gives a cutting in somewhere. 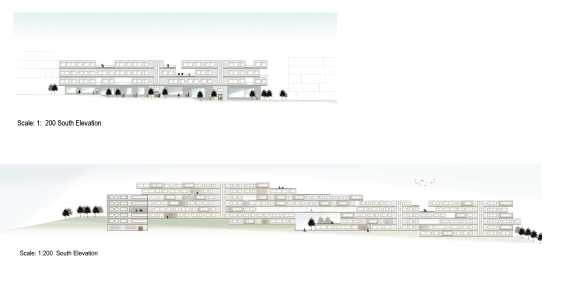